Conversion, Colonialism and the Corruption of Humanity. 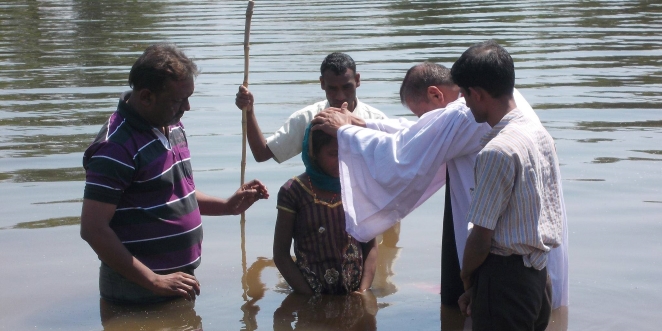 Conversion, Colonialism and the Corruption of Humanity.

The evangelist, an educated highly qualified and travel -seasoned man, asked me “What’s wrong with Conversion anyway?” and the scale of the problem began to reveal itself to me. At first like a glimpse of a distant incoming tide, the revelation of millennia of small lies planted in a billion vulnerable children’s minds twinkled into vision, like a tide of small lies planted in a trillion books and scattered all over the globe throughout history, the reality of the depth of his conditioning came crashing towards me like a tsunami.

Using a purely Dharmic mindset, I realised that our fight is not against ‘Conversion’ per se, it is against asat (the unreal), it is against adharma (the unharmonious), it is against avidya (the false), it is against himsa (the violent) on all levels. At its core the rejection of “Conversion” is a refusal to abandon what is real and harmonious, what is proven and ebullient, for blind belief, for contempt and exclusivist supremacy, for utter gibberish.

To label our dharmic perspective, what we call darshan, a “faith” is itself a gross falsehood. When a group of predominantly men, uncultured, uncivilised, plagued with rabid desires and greed, dress up in ostentatious garb and clothe and camouflage their malific purpose, their desire for endless self satiation, in spiritual language, theocracy ie the proxy rule of humans on behalf of a distant inaccessible divine dictator, is born. An institutionalised determination to reject reason and reject experiential evidence, an unwavering commitment to ignorance, to determinedly NOT NOTICE, a “faith” is born.

When further cemented by an avowed adherance to emotional violence, to guilt and fear, a denial of universal love and familyhood, and then presented to the world, as divinely sanctioned, a faith is born. In reality it is nothing other than the worst of all supremacist ideologies ie colonialism, hiding in plain sight.

Theocracy, the illegitimate angry guilt ridden child, born when greedy power hungry men rape Hypatia, the repository of spiritual knowledge, can never bring tranquility or peace. Instead, seeking to avoid turning inwards and facing its own demonic nature, it seeks to eradicate everything which can reveal to it, its own true face. Preaching love, to practice perversion.

For theocracy to thrive and survive, Sanatan Dharma must be eradicated, by every means. Deceit, violence intellectual emotional and physical violence, are all weapons of choice in this kurukshetra. This is the satya of what we are facing and have been failing to recognise for over 1400 years. Remember one of Raavanas siddhis was to weave spells, mayavi, to create delusion in the mind of others, his conversation with Sitaji in the forest was nothing other than weaving maya, from the master mayavi.

The whole “multi faith” concept is maya, is adharma and the vast majority of the purveyors of this asat are themselves, usually innocently, under the influence of maya, but the ones standing at the higher echelons of organised theocracy, their hearts are dark.

To blindly buy into the “multifaith” industry where all “faiths” are outwardly presented as valid, is participation in a deception and an act of betrayal of humanity. Consider the lack of integrity of those “faiths” and institutions which promote “multifaith” in one country whilst actively seeking to eradicate other traditions in other countries, surely an act of hypocrisy and hostility supposedly sanctioned by a loving merciful but apparently deceitful deity. Maya?

“Asato maa sat gamaya” is a plea to first free ourselves from ALL that is unreal, to purify and restore our own faculties to see that which is real, clearly. When one sees clearly, the dishonest enterprise of conversion is recognised as being the greatest crime against the human being, against the process of very civilisation itself, perpetrated in the name of our deepest divine nature.

If Satan exists, the tears of billions of murdered, sensible whole men and mostly women, tortured and killed for the crime of being able to reason, for wanting to build lives on the wisdom of elders, are his sacrifices. The cries of millions of innocent children cast down from the innocent joys of childhood into the abyss of dark depressed despair, desecrated to satiate corruption, all bear witness to the fact that his demonic fingerprints are all over this Evangelical colonial missionary enterprise.