The importance of lineage can’t be underestimated. A lineage ensures that the accumulation of spiritual wisdom, of many lifetimes of experimentation are not lost. Until the arrival of the “Blind belief is king” ideologies approximately 1400 years ago, lineages were the organically evolved repositories of the accumulated learning of humanity. Family lineages, occupational lineages, creative lineages and knowledge lineages all carried these lessons and wisdom from generation to generation.
All lineages served two purposes – the preparation of the individual and the transferral of the body of knowledge so carefully and painstakingly acquired and refined by the lineage.  In all of these traditions “mastery of the essence” was what earned a person respect, and often a livelihood also. Membership of the lineage was also a sign that as an individual, this person has been deemed trustworthy. Membership of a lineage was the “badge of honour” which gave comfort to members of the community. Above all, a lineage ensures that the accumulation of spiritual wisdom, of many lifetimes of experimentation is not lost but also is not permitted to pass into the hands of those who would abuse it for harm, personal gain, or self-aggrandisement.
Some long range explorations take many generations and in India the lineage “Guru Shishya Parampara” ensures that this wisdom and knowledge is institutionalised. If there is one thing supremacists and colonialists hate, its indigenous institutions and history bears witness to the corruption and deconstruction of such knowledge traditions by those who would conquer. The Church of the Dark ages,  (some would say .. not yet over ) in burning witches and pagans across Europe was undermining and destroying knowledge lineages, St Francis and the burning of thousands of temples and Brahmins in Goa,  the British colonialists in India destroying the integrity of the Gurukul system deliberately doing the same and now this new raft of “Yoga Scholars” typified by Theo Wildcroft, in trying to give the appearance of academic sanction and validity for the concept of ‘post lineage yoga’, is doing the same.
From a YogaVidya perspective, apart from being another manifestation of a troubled klesha afflicted, deconstructive mind, deliberately or naively, this is an abuse of sacred lineage. 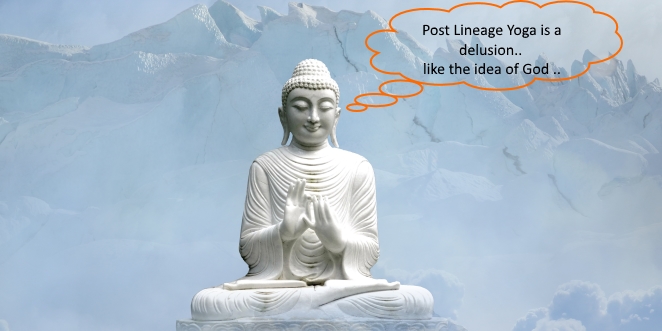 Jnana Yoga teaches that the nature of mind is to seize dumb, inert lifeless concepts and to give them the appearance of 3 dimensional realities, as every cheap 2 bit marketing hustler knows. YogaVidya is the protected curated knowledge space wherein souls troubled by mind find refuge and nourishment, in tranquility. The act of pouring concepts and mind noise into this pristine emptiness is an act of vandalism… and they, being “scholar practitioners” 🙂 should know it to be such. The deceitful ego and it’s search for immortality, “please look at me I’m important”, manifesting here as a desire to be acknowledged for coining a catchphrase, going even to the extent of allegedly plagiarising in order to gain recognition, is an impulse, usually left behind in adolescence. Can you imagine Rishi Patanjali, the father of a lineage, demanding to be recognised and credited for the use of Ashtanga yoga?

The beauty and power of the sutra format is that it plants a seed idea, which then flourishes in a suitably prepared mind, with realisation flowering according to the specific mind itself. What has been done with this “Post Lineage Yoga” phrase is the creation of a sutra, a seed whose action and therefore purpose is to create mental activity in minds seeking yoga. Unlike every sutra in YogaVidya, which is oriented towards tranquility of mind, this sutra phrase has generated disturbed vrittis and therefore hinders the attainment of the state of Yoga; it is an act of intellectual trespass, of cultural transgression, of mental violence. It is an “asura sutra” …. another sutra to be trademarked perhaps, Theo?

Imagine that you are on a mission to purify your private swimming pool – you have spent weeks painstickly removing twigs and leaves, repeatedly filtering the water and then someone casually tips a wheelbarrow of garbage into it polluting it and sending waves rippling outwards. The creating and dispersal of this “Post Lineage Yoga” idea is precisely such an act. It’s the mental equivalent of someone urinating in your pure desert spring oasis, and it has been done to simply try and grab a little limelight. Imagine a laboratory which had been refining a cure for cancer and after working for decades the team of researchers decide to make it available free of charge as a gift to human evolution and well being. Some grubby little corporation would add a little of its own pollutant and claim a “new improved version” and in order to secure market share would need to demean and undermine the work of the original laboratory, the original lineage. …
This onslaught against lineage is nothing other than an attempt to again bifurcate Sanatan Dharma from YogaVidya, how desperate and small minded. Yoga is the name of the state which is observed when tranquility of the cerebrating machinery is achieved, and if these so called scholars have made one thing clear, there can be no Yoga until their scholarship has been left far behind. We should all look forward to moving to a future for YogaSaadhana which now lies beyond the mind noise thoughtlessly thoughtfully generated by these untranquil minds, perhaps I should call it “Post Scholar Yoga“, I feel the temptation of a trademark arising…. but see it incinerated instantly as ahuti. The future is bright and Orange …. Aumn Shanti Shanti Shanti, tranquility tranquility tranquility Aumn.
4 9th March 2018
GeneralSanatan DharmaTraditional YogaWestern Yoga