Can Non Hindus “do Yoga” without “becoming Hindu”? No…. but 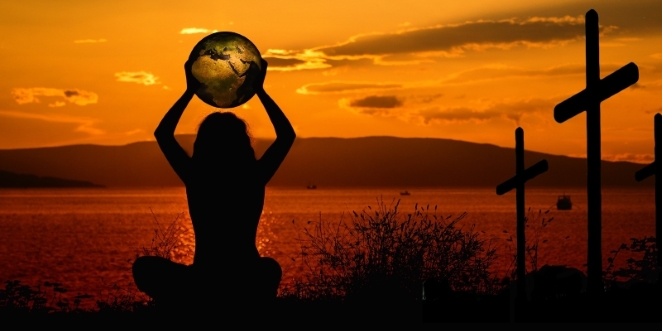 Can Non Hindus “do Yoga” without “becoming Hindu”? No…. but

Can Non Hindus “do yoga” without becoming Hindu?

This question is being asked with increasing frequency …. a “Hindu” answers…

If you continue to practise yoga diligently, you will learn WHAT you are. You will become intimately familiar with your own body and in doing so become familiar with every body. When you continue, you then begin to know your own mind and its functioning and it’s capacity for trickery and delusion… and then you know everyone else’s mind…and their capacity for confusion deceit and delusion.

With each stage you become closer to EVERY other person and life form and you begin to sense a deep connection with breath and life force. The more refined and sensitive a being you become.. the less religious you become and the more Hindu you become. To be Hindu is to be beyond the narrow book bound chains of religion, to be free to explore your being and existence without fear of apostasy, blasphemy and excommunication, and to revert to the state in which you were born, your essence which Hindus call Dharma. You become Dharmic ie harmonious, tranquil, non-violent and yet ebullient and radiant.

Religions are puddles focussing on boundaries and false differences. When the water in the puddle remembers its true essence of being water and not puddle, it identifies with the ocean and is no more a puddle. Religion diminishes us into puddle consciousness, Yoga returns us to Dharma, to ocean consciousness, unity with life, YOGA.

Religions like to label what Hindus do as religion but we know what we are. In the Euro Christian definition/ context Hindu means ‘not Christian therefore bad’ . It was not a definitive label but an exclusivist label. How else can you label an infinitely diverse range of paths to connect with the divine?

‘Hin’ in sanskrit means violence ie the application of force to inflict suffering. You will perhaps have come across a-hin-sa … hin-sa means the state of violence a-hin-sa is the absence of the state of violence. ‘Du’ is resistant .. unmoving… unaccepting.. you get the feeling of resistance ? This root is in ‘durable’ and ‘obdurate’ via latin… so Hindu, for us who know, means literally ‘resistant to violence’ whether physical, emotional or intellectual. That’s what being a Hindu is and that’s why India has spawned so many diverse ebullient paths to connect with divinity, to not do so would be violent. Those who do not know what a Hindu is can call themselves whatever they wish be it Jain Sikh etc etc but they are all based upon and united by Dharmic principles and 100% Hindu.

So in the same way that a puddle cannot be the ocean a true Yogi cannot be religious and one cannot be a Christian Yoga teacher and remain true to either.

The more entertaining question thus arises… can one be Christian and Hindu? It’s Sunday… bless you in your contemplation.