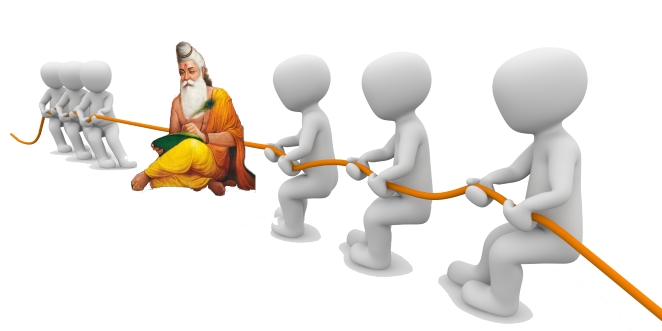 Whenever a Hindu stands to challenge the corruption of YogaVidya, the science and art of Yoga, uncoloured folks leap up and scream ” if the truth is universal how far can a particular culture go in claiming ownership of that universal truth?”.

In shouting this, I feel that a certain shallowness is revealed or perhaps something more undesirable. The fixation with ownership and the power and control which ownership grants is at the root of this phenomenon called western culture and it’s contorting of YogaVidya.. A YogaAcharya doesn’t own a universal truth he or she is a custodian with a sacred duty to preserve it intact so that future generations too may be healed in mind and body.

So the desire to protect it as we did against the invasions of the desert barbarian mughal hordes and then against the invasions of the European barbarian hordes is nothing to do with ownership at all. The fact however that you fixate upon ownership, which is characteristic of those who desire to claim rights of access where they have no legitimate rights, is sad. 443 European and Indigenous folk land treaties were made and broken by Europeans of this mindset and the native Americans laughed at the concept of ‘owning’ mother earth. They didn’t appreciate that the core of the european ownership delusion, is the right to deny access.

India sufferred similar betrayals and we custodians have learned about the mindsets which view theft as a right, which view the afflicting of violence as a divine mission, which worship the right to dominate and destroy what they don’t understand as bringing “order and efficiency” . The knowledge which can liberate and elevate the human to the divine can if polluted and tainted also ensnare and imprison.

We saw how the west took the concept of Divinity, so clearly articulated in the most ancient of humanity’s scriptures, the Vedas, and created “religion” and 2000 years of physical mental and emotional abuse, slavery and violence ensued. And now we have Christian yoga determined to do the same…. the fact that you are not up in arms fighting the way in which Christianity is appropriating this “universal truth” and making it exclusive to Jesus may also be worthy of reflection.

One final point…. culture for us heathen Hindus has a purpose and a direction, self realisation and it permeates our science, art and social evolution… it seeks to cultivate and curate human activity so that all may experience ebullient existence and then transcend this with realisation of divine parentage. Is it valid to describe the random “trial and error, consume away” approach favoured by the west as culture? The destruction of the Earths intricate web of life supporting relationships on the altar of rampant capitalism-driven consumption and the reduction of the human form, the pinnacle of a 65million year evolutionary process, to the sub human “homo americanus”, is hardly evidence of any cultivation of anything of value..