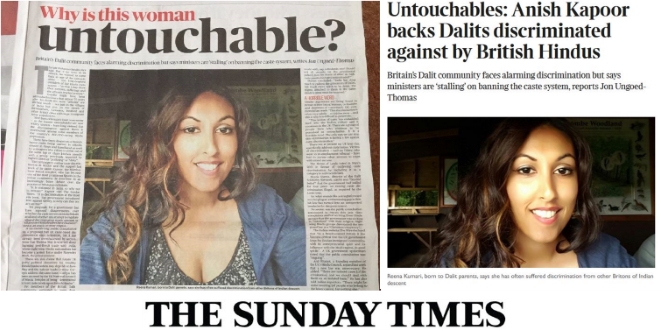 This Sunday, the Sunday Times added its own significant weight to the long running campaign to vilify and denigrate British Hindus, by declaring that 50,000 British Dalits were suffering from the scourge of “caste discrimination”.  In doing so Jon Ungoed-Thomas has merely served to declare to the world, just precisely the degree to which the Colonialists Hinduodium “hatred of all things Hindu”, still pervades the pillars of the British Establishment.

On the 4th March 2013 the evangelical Christian fundamentalist Bishop Lord Harries of Pentregarth declared to the world that 480,000 British Dalits suffered at the hands of other British Hindus on a daily basis.  Lords Deben, Singh, Sheikh, Alton and others added their voices to emphasise the scale of the horrors blighting the daily lives of 400,000 of her Majesty’s subjects. Baroness Flather and other peers leapt to denounce the morally bankrupt acts of the demonic Hindoos who had brought their uncivilised religious prejudices and practices to the sacred sin-free shores of Great Britain. If there are now only 50,000 British Dalits .. where have the remaining 350,000 British Dalit victims gone?

The untruths which were peddled that day have been thoroughly scrutinised, documented and accepted as false by all unbiased observers and as a result the Conservative Government refused to permit a flawed law, founded upon religious hatred and prejudice, to be enacted. After a further in-depth review of the data and the process of legislation,  it became clear to Ministers that not only was the pogrom in the Lords wholly unjust but also that the involvement of the academics such as NIESR and indeed the Equality & Human Rights Commission itself, was neither independent nor without prejudice. The Government permitted the British Hindu, Sikh and Jain communities to participate directly in an open Consultation, one conducted by the Equalities Office itself, a consultation which closes today on the 18th September 2017.

Remarkable however is the action of the Sunday Times, who one day before the closing date, the date upon which its capacity to influence the consultation would be at its peak, chose to publish atrocity literature, propaganda intended to harm the Dharmic traditions of the UK.

An oversized picture of a radiant young woman was displayed under a distasteful (and subsequently changed on line) headline “Why is this woman untouchable?”  The Sunday Times revealed that there are now less than 50,000 Dalits in the UK, and rather than investigate the worrying disappearance of at least 350,000 of her Majesty’s subjects, who appear to have been ethnically and surgically cleansed from these sceptred isles, chose instead to present a litany of anti Hindu prejudices, presented in a manner designed to simply ignite hatred of Hindus.

Even the deeply flawed and prejudiced work produced by the EHRC accepted that “caste and religion intersect in complex ways and in any definition of caste for the purpose of legislation, it ought not to be associated with any particular faith group. .. and that caste, whilst being distinct, is not a feature of any specific religious group, but pervasive across cultural traditions was the consensus view amongst academics.”

Even the NIESR report so skilfully misrepresented by the Honourable Lords, clearly stated “The findings of the study should not be used to suggest that caste discrimination is any more perpetrated by one …  religion or regional background than another.”

and yet the Times focussed singularly and specifically upon the British Hindu Community, ignoring completely that even the NIESR report highlighted 28 out of 32 cases (all anecdotal and unacceptable in any robust study) as involving Sikhs and not Hindus. Does the Times give appropriate proportionate mention of British Sikhs? No. Why not?

Jon Ungoed-Thomas seems to have noticed none of this, being specifically focussed on internationally airing the views of evangelical Christians and anti Hinduism campaigners such as Meena Verma and activists such as Satpal Muman, both of whom view the problem to be “Hindu fascists”, all again without providing a shred of evidence.

Against the army of academics and religious scholars who have presented historical and current evidence which conclusively challenges the thinly veiled hate speech of the Christian evangelical lobby, the Sunday Times parades the expertise of Sir Anish Kapoor, not a scholar but an artist. It would seem that the Times has determined that academic credentials include being a “poster boy” for the white supremacist Lord Macaulay’s declared goal of producing “a class of persons Indian in blood and colour, but English in tastes, in opinions, in morals and in intellect.” and we might add prejudices. Macaulay is no doubt clapping his hands in delight at the sight.

Disappointing but not surprising is the fact that the Times had no interest in publishing a balanced unbiased article choosing instead salacious “eyeball grabbing” imagery supported by writings which fit Rajiv Malhotra’s description of “atrocity literature” ie ” literature generated by western interests with the explicit goal to show the target non-western culture as committing atrocities on its own people, and thus justifying Western intervention”, a favourite strategy of evangelical and colonial  movements alike and recognisable as having been deployed by the Sunday Times. 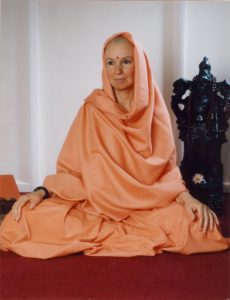 In a letter to the Sunday Times, Swami Ambikaanand Sarasvati (a non-indian of “white Caucasian” descent ) writes ” Young, beautiful women are still used to sell everything from cars to washing machines, but why was it necessary to use her to sell your position on the caste legislation?  Is not using another person ~ who happens to be a radiant woman ~ one of the most insidious forms of bias and discrimination?”

I am a sannyasin, a Hindu monastic, and thereby a member of the final and most honoured of the four ‘life callings’ of Hinduism.  In your view I am also an untouchable insofar as I was born “out of caste”.  I was initiated into the Holy Order of Sarasvati on the banks of the sacred Ganges by a Brahmin, the then president of an old, established and orthodox Hindu ashram (monastery) who showed no signs of being disturbed by my untouchability.  In the UK I have founded and headed a Hindu Chaplaincy through my local temple, and have enjoyed good standing in my local Hindu community for whom I regularly perform weddings, funerals, prayers and other sacraments.  Do some people like me more than others?  I’m sure of it.  Does that have anything to do with my untouchability?  I don’t think so ~ it’s probably more to do with my rather abrasive wit than my birth.   In short, as an untouchable, what you are describing in your article is not something I have direct experience of.

Satish K Sharma, General Secretary of the NCHT(UK) wrote :- It is clear that the Sunday Times has deliberately 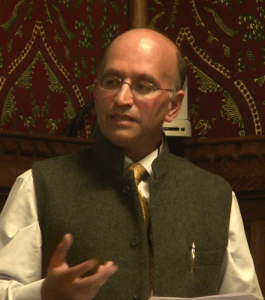 targeted the British Hindu community with the publication of this article. Although mentioned our organisation NCHT(UK) were not contacted by the author of the article. Its timing, its design and its biased content are specifically intended to influence the uninformed observer and to incite hatred against Hindus – which surely is a hate crime, an offence. Rt Hon Amber Rudd, Home Secretary announced as part of the Hate Crimes initiative, “Hate crimes are pernicious; they send the message that some people deserve to be targeted solely because of who they are or who they are believed to be. Clearly the Sunday Times article seeks to influence people in the manner in which they perceive Hindus.  At the very least a retraction or public apology is due.

Noteworthy is the observation that other past articles have been similarly discriminatory and harmful for both India and Hindus but it is tragic that even 70 years after the collapse of the white supremacist colonial Empires, the instruments of white supremacy are still asserting their racist world view.

On Sunday 17th January 1847, the Sunday Times editorial announced “Weak and divided as the Hindus are, we should yet be unable to govern them, did not the conviction exist in their minds that our rulers are preferable to any other which, in the present state of the world, they could ever hope to enjoy”.

Losing India, the “Jewel in the Crown”, held in bondage by violence, rape, plunder and theft, 70 years ago could be seen as an act of natural justice but misplacing 350,000 of Bishop Lord Harries’ carefully and diligently protected British Dalits, in the world of the 21st century would seem to be a failure of Biblical proportions. Noting the position and actions of the Sunday Times in 2017, it would appear that little has changed in over 150 years and that the loss of empire and the diminishing tolerance of white supremacy is still troubling the institutional instruments of supremacist rule.